Onuma was the last of three lakes to freeze over on Mt. Akagi where we live. When we left on December 24th it was still open water with just a bit of ice around the edges. We spent our twelve days of Christmas in Nagano with family, and when we returned the lake was not only frozen, but ice fishing for smelt was in full swing. This weekend we had guests and we took them for a walk on the ice. It was a first for the little boys so they were pretty excited. We chatted with a few of the fishermen and none of them were having much luck.

Meanwhile, I shot a roll of Neopan 100 Acros with the New Mamiya Six. Afterwards I discovered that I had forgotten to change the ISO from 400 to 100 so I expected everything to be two stops under-exposed. But to my surprise, the photos came out really well. It was so bright that  I was having trouble seeing the shutter speed data in the viewfinder but it looked like the shutter speed was maxing out. So my guess is that it was so bright that even at the maximum shutter speed for that camera (1/500s) the images were properly exposed. I was stopped down to about f/16 for most of them.

I like shooting winter snow scenes in monochrome and this was a great day for it. But even more importantly for me, these shots have tremendous sentimental value since it was exactly fifty years ago that my dad captured some pretty nice monochrome images on the same lake when our family went ice skating. 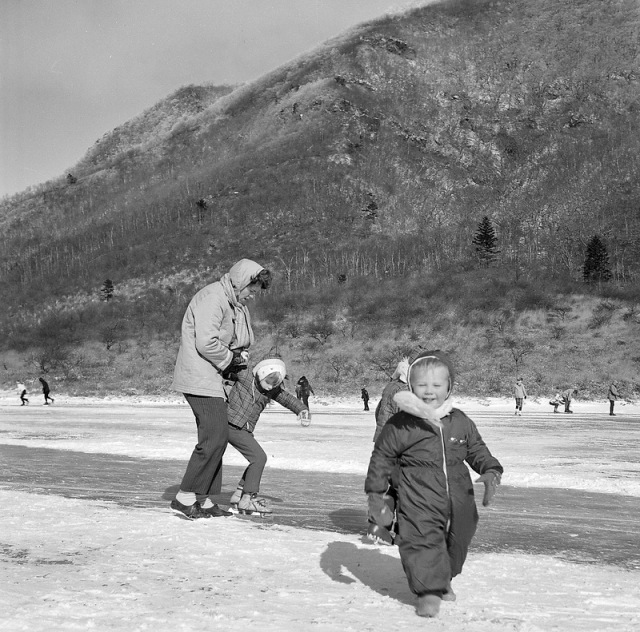 So… fifty year later, here are a few of the images I got.

Yes, that really is a mountain biker out on the ice!

This entry was posted in New Mamiya 6. Bookmark the permalink.