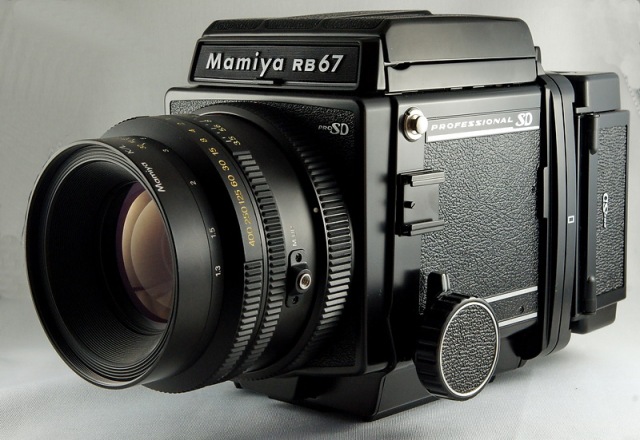 This medium format camera is just plain big! What makes it unique? At least two things. First, as the name suggests, the film back rotates (RB). So for portrait orientation you leave the camera on the tripod and just spin the back. Secondly, this camera is 100% mechanical. That means no batteries!!! I find that sort of engineering to be somehow fascinating.

I’ve picked up a few accessories for this camera including an unmetered prism finder which works with either the RB or the RZ bodies, a very old metered prism finder, a battery powered, self advancing 6×8 film back, a 645 film back and a cable shutter release that has two connectors and is used for mirror lock up and bulb exposures. I also got a grip for it. Combined with the prism finder this rig is theoretically hand holdable. But in truth it gets rather bulky to say the least!

See some of my photos taken with this camera here.

In June of 2012 I sold this camera and all the gear associated with it. It’s a great camera and mine was probably used fewer than ten times so it was in beautiful condition. But I had to let something go to help pay for the Fuji GF670 so this was the one. It wasn’t because I disliked this camera in any way at all. On the contrary, it’s a fabulous camera and I will probably miss it. But in reality I use medium format cameras usually in one of two ways. I’m either shooting color reversal film and doing landscapes on a tripod, or I’m shooting monochrome negative film and doing handheld snapshots and casual photography. In the case of landscape work the Pentax 67 and the Bronica GS-1 are both lighter and better suited. In the case of handheld work the Bronica GS-1 and the Fuji GF670 are better suited. The RB really shines in the studio but I rarely do studio work, especially with a film camera. So the RB ended up sitting a lot. Now its gone but the GF670 is getting a lot more use.